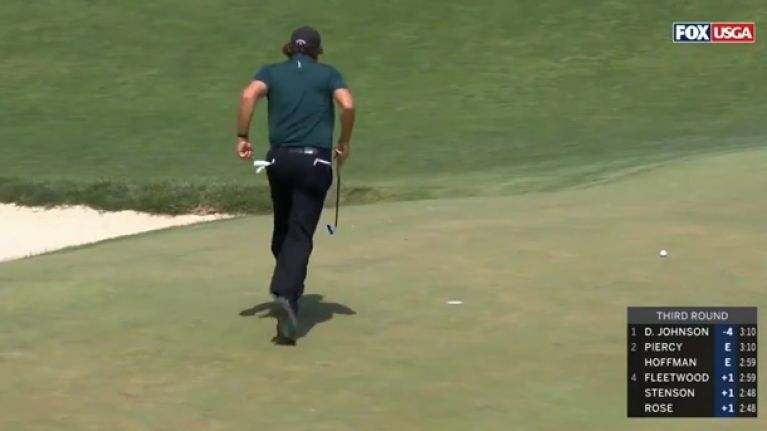 Undoubtedly the most memorable moment came courtesy of Phil Mickelson. Sure, Brooks Koepka won for a second straight year…congrats man. Who the hell is Brooks Koepka?

Windy conditions turned a tough course into a total nightmare. Then again, Dave Portnoy managed to gut out a 66 in the weeks leading up to the tournament so pardon me for dismissing the whole “COURSE WAS TOO FUCKING HARD!” charade. So what if Pres had unlimited mulligans…I heard he only used a couple dozen anyway.

One guy everybody should love is Phil Mickelson. If you had any reason not to adore the chunky southpaw slicer, you can have one no longer…

Phil has officially become the BAD BOY on tour!

In the midst of carding a third round 81, Mickelson embarrassed himself and disgraced the game of golf all at once.

Disgraceful move by Phil Mickelson. Embarrassment to the game. Thought he was better than that. Bush league.

Phil Mickelson just did something I wouldn't do if I was on pace to shoot 100+ on a par-3 course.

Doing that in a MAJOR?! Pick up the ball and walk off the course. Embarrassing.

Are you kidding!? — that was embarrassing!? — if that’s embarrassing, aren’t like 95 percent of golfers total fucking embarrassments? Ok, so that might actually be accurate but I stand my original question…

Is this a joke? — (also, Jeremy Rauch sounds like the worst type of golfer: super shitty yet serious. Maybe be good before worrying about etiquette, k?

What Phil did was awesome, hilarious, and above all else showed me that even pros can reach a point where they simply say “Fuck this, next hole please!”

Phil wound up taking a 10 on the hole; effectively ending his chances of winning the tournament (*SPOILER* – he was dicker’ed long before making a mockery of the 13th).

Anybody that has played golf at any level can relate to this moment. And if you consider yourself to be of the opinion that what Phil did has no place in the game, I hope we never get paired together in a foursome…

…cause you’ll fucking hate me. And we will most certainly be fighting before the second tee block.

Lefty has been a model golfer for years, albeit with a somewhat shady financial portfolio. His actions reflected his understanding of the predicament and the rules governing his actions: his ball was rolling off the green so rather than allowing it to speed away, why not chase after it and bang it back up the hill? He knew it was a two-stroke penalty and simply did not give a ****!

PUT ME DOWN FOR A 10…I’M DONE WITH THIS [BLEEPING] HOLE! — Phil Mickelson’s (and countless others) inner thoughts

Despite all that, Phil remains the first-class beauty he’s always been and doesn’t deserve to have his reputation tarnished or put on trial over a stunt that amounts to nothing more than a funny moment where a PRO wanted so badly to just be a JOE…

Forever welcome in my foursome.