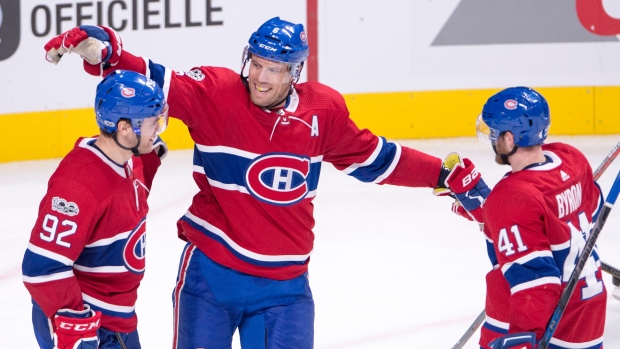 Seven straight losses had the Montreal Canadiens facing the collective ire of their city, their province, and their fan base (wherever they may reside).

Calls for the GM’s job, Julien’s daily line juggling, and Carey Price meltdowns have dominated sport section headlines across the country as the storied franchise seemed to be on a runaway train heading straight for a cliff…

…Last night, if nothing else, saw the train slow marginally — but believe me, it’s FULLY capable of regaining speed quickly in that market.

The box score will show 5-1 Canadiens, but this game could have been much different if not for the early brilliance of…you guessed it…Carey Price.

Off to an uncharacteristically bad start — The Price is Wrong *blah blah blah* — the game’s most dominant non-positional player was on point last night stopping 26 of 27 shots, including several critical saves early.

— Ten seconds into the game early as a matter of fact —

Off the opening face-off, the Habs were immediately exposed and gave up a prime scoring opportunity to Aleksander Barkov. After the game Shea Weber, who was on the ice and appeared out of position, suggested it was a blown forecheck but didn’t want to go into details, instead choosing to bask in the unfamiliar glow of a regulation triumph.

“We have a certain forecheck off of each faceoff, and we didn’t do it at all. We were fortunate Carey was spot on there.” Weber explained, not willing to provide further detail.

Examining the play, Philip Danault, who routinely draws praise for his two-way mentality is caught way up ice and fails to get back to disrupt Barkov as he drives to the net. Could you imagine if that had been Galchenyuk at centre making that same error? — I continue to be baffled at how Galchenyuk, in the eyes of management, isn’t good enough to play down the middle for this team. Even with the intention being to trade him, his greatest value will be derived from him succeeding down the middle. Instead, Michael McCarron is a better option? I have to respectfully disagree with that assessment.

Anyways, back to the Carey Price’s…I mean Montreal Canadiens!

Even as they celebrate a much-needed win, it’s no secret that in order for this team to go anywhere, Carey Price has to be stellar. Not good, not great, but stellar. Night in and night out.

While some teams boast levels of offensive prowess capable of masking goalie inefficiencies, I wouldn’t put the Canadiens in that category. They are a team much more suited to grind out low scoring games, and more importantly, play from in front — like most teams are, but the Habs are extraordinarily incapable of erasing multi-goal deficits.

Consider the goals they got tonight, including a three goal blitz in the second period, all in a 95 second span.

The first was an off-puck net drive by Galchenyuk (ENCOURAGING!!!), but he kind of just swung his stick wildly at the juicy rebound provided by James Reimer — a main supplier of juicy rebounds and five hole goals in the NHL. The puck bounced up…and in. Skill with some luck we’ll call it.

The second was a Weber rocket from the Ovi Spot, aided by a timely screen by Artturi Lehkonen. Traffic in front, a novel concept often ignored by the Canadiens — hard to blame them for not wanting to stand in front of Shea’s shot.

The third, a gift that wound up on the stick of Brendan Gallagher who quickly buried a goal low blocker side on Reimer. For the record, Gallagher never once lifted his head to look at where he was shooting. Pardon me for focusing on the negatives, but…

Weber blasted a rolling puck short side top shelf for the fourth and captain Max Pacioretty finally got one on a scramble in front of the net that Reimer nearly saved. The part of that goal I found encouraging was Danault’s zone entry. Rather than dumping it in, Danault built up speed in the neutral zone and carried it in. Not long after crossing the blue line, the puck was in the back of the net — Nevermind possession metrics, or zone time, this goal was a byproduct of speed through the neutral zone and one player’s decision to drive the net to make a play. Habs need more of that.

All in all, the goals were encouraging but were still rooted, to some degree, in good puck luck. However, the luck bestowed upon the Canadiens was as much an outcome of work ethic as it was anything else.

Another positive sign in the win over the Panthers was the play of Nikita Scherbak, who before his call up had produced 9 points (1G, 8A) in 6 games with the Laval Rocket.

In just over 11 minutes of ice-time, Scherbak, playing with fellow Rocket teammate Michael McCarron, and maligned centre/winger/who the heck knows Alex Galchenyuk, showed promise. Although he came away with no points on the evening, his presence was noticed each time he was on the ice…and that is a good thing. Hard on the forecheck and glimpses of chemistry with Galchenyuk should, at the very least, buy Scherbak another game or two with the big club. His offensive skillset, if harnessed and developed, would serve as a welcomed addition to the Canadiens lineup — also, what are the alternatives at this point? Torrey Mitchell? Ales Hemsky? — Scherbak stays!

This was as close to a must-win game in October as you can get, and by coming out on top, it gave a team in hockey’s most volatile market, a moment to exhale.

“I think there was a lot of weight that came off our shoulders,” Claude Julien said.

But in saying that, Julien, and by extension his team can’t get comfortable. And they won’t, I assure you.

“It’s a step in the right direction, but we can’t step back,” explained Shea Weber, now the Canadiens leading goal scorer. “We’ve got to keep our foot on the gas and we’ve got to keep getting better.”

There are still holes — the defence for one, continue to scare me with their lack of mobility. Petry and Alzner, no longer a pairing, do not look like top-4 players at the moment. When Brandon Davidson is your 3rd best player on the back-end (and he’s playing well, don’t get me wrong!), considering yourself a legit contender, which the Habs do regardless of record, seems to be an inflated expectation of oneself.

Work still needs to be done on all fronts as the Canadiens build towards a full 60-minute effort — last night was roughly 40.

Carey Price affords them the luxury of taking the odd shift off, but continuing to neglect sizeable chunks of games will no doubt lead the Canadiens right back to rock bottom.

Hopefully last night serves as the start of the turn around in La Belle Province.